Nammo Energetics Indian Head  A Long Time in the Making 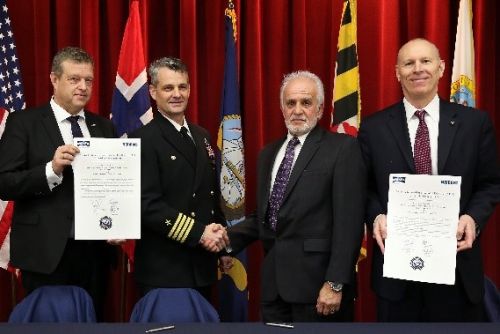 After several years of behind-the-scenes activity, one of the largest economic development projects in recent county history went public in January of last year when Nammo Energetics Indian Head and an official from the naval facility at Indian Head announced a public/private partnership that would bring significant investment and high-paying job creation to Charles County.  A lot has happened in the last 14 months since that announcement, so we thought it was a good time to provide an update.

The Nammo Energetics Indian Head (NEIH) story goes back to July 2014 when the Charles County Economic Development Department and the Maryland Department of Commerce began working with officials from parent company NAMMO who were looking at potential U.S. locations favorable to their type of energetics work.  Nammo is an international aerospace and defense company headquartered in Norway and is one of the world's leading providers of ammunition and rocket engines for both military and civilian customers.  The company was in talks with the Naval Surface Warfare Center Indian Head Explosive Ordnance Disposal Technical Division (NSWC IHEODTD) as one of the possible locations.  “Humble Viking” was the code name used throughout these discussions to preserve confidentiality – as often happens in economic development projects.

As those talks developed into a partnership, Charles County, with support of the Commissioners, signed an incentives offer with the Maryland Department of Commerce in December 2016, leveraging up to $40,000 of county funds to secure a commitment of $400,000 in State MEDAAF funds for the project. On January 19, 2017, representatives from the newly created U.S. subsidiary, Nammo Energetics Indian Head (NEIH) and NSWC IHEODTD were joined at the Indian Head Pavilion by County, State, and Federal officials along with representatives from the Town, the Military Alliance Council (MAC), and the private sector to announce and celebrate the signing of a 30-year Public Private Partnership Agreement (P3) made possible through the base’s CITE designation.

Under this partnership, NEIH plans to address under-utilized space on the base to manufacture rocket motors and warheads. This agreement will also bring significant job opportunities to our residents and strengthen NSWC IHEODTD’s position to continue next-generation research and development for decades to come. The company also considered locating a handful of employees outside the gate, which the County had also encouraged with an additional $10,000 incentive.

In the year since that event, NEIH made the decision to relocate its entire regional headquarters from Arlington, VA to Indian Head, bringing even more jobs to the county.  The incentive agreement with the State and the County was revised to offer $600,000 from the State of Maryland, leveraged by $60,000 from Charles County.

“Charles County and the State of Maryland have been very responsive to our requests,” says Pete Sioma, NEIH President and CEO.  “We are grateful for the assistance we have received, and we look forward to working with local and state workforce resources as we step up our hiring and build our NEIH team over the coming months and years.”

Working with Shasho Consulting for their real estate needs, NEIH has moved into temporary space in Waldorf and expects to have about 15 employees on site by the end of April.  Hiring is underway, and several Charles County residents have already become NEIH employees.  The company has identified a permanent site in the Town of Indian Head and expects to break ground in the next 120 days on a new headquarters.

Additionally, engineering efforts are underway for the first conversion of a facility on the base at Indian Head with expectations that by the end of the year, the company will be hiring manufacturing personnel. NEIH has committed to creating more than 130 new, high paying jobs for their manufacturing operations and will invest approximately $30 million in facilities.

As always, collaboration has been a key component every step of the way – and will continue to be.  The public sector, represented by government agencies at all levels collaborating with each other and with the private sector, represented by NEIH itself as well as local companies and organizations that have supported their efforts – all have a role to play.  And we look forward to continuing to join community partners in helping NEIH settle in to their new home in Charles County, Maryland.