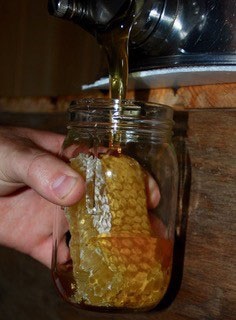 Honey is sweet and shelf-stable, but its capabilities extend far beyond taste and time. This humble pantry staple harks back to 2,400 B.C., during the early days of beekeeping in Cairo, when Ancient Egyptians used honey as a sweetener and medicine for a variety of ailments. Local honey made with the pollens of Southern Maryland plants provides the same benefits to Charles County residents today.

Yes, honey has found its sweet spot again, particularly as people seek natural remedies for inflammation, digestive woes, and coughs. But, it’s important to know what you’re getting; a bottle off the shelf at Safeway will not have the same benefits as that made from Charles County bees.

Cindy Beuchert, owner of Zekiah Farms explains, “The honey has to be local, raw, and ideally unfiltered. When you pasteurize it, or heat it, you kill a lot of the good stuff. Honey also has natural antibiotics, antifungal properties, and probiotics, but if you heat it up, it will kill it.”

Zekiah’s honey is made with the pollens from a combination of wildflowers, vegetable plants, and any of the hundreds of trees and plants that are native to Southern Maryland and on their farm. By having the bees use a mixture of pollens, they create a honey that has a very unique flavor. It is also raw, unfiltered, and comes directly from the hive. There’s no extra processing or screening.

The honey fights seasonal allergies local to Southern Maryland because the allergens and the nectar are coming from the same plants.  Customers come to their store to buy local honey for their allergies, but their honey is also sought after by people from across the US as a daily sweeter due to its unique flavor.

Zekiah Farms has kept bees for over 10 years, but they were originally brought in as a way to pollinate the crops, specifically pumpkins.  “We kept getting blossoms, but no fruit,” says Beuchert. “So, that’s how we got into the bees. It started as a way to solve a problem for my crops, but honey itself has turned out to be a better crop than the pumpkins and everything else.”

Honey is typically harvested about this time of year (late Spring/early Summer). Beuchert says, “The bees start producing in the spring when everything is popping out, and then you want to give them time to make food for themselves to carry over the winter.” The honey is sold on their farm all year round.

Zekiah Farms’ store hours vary according to the season, but currently are:

Tuesday, Thursday, and Saturday: 9 am to 4 pm

Monday, Wednesday, and Friday: by appointment

Local honey can usually be found at one of Charles County’s three farmers markets. Check out those times and locations here.