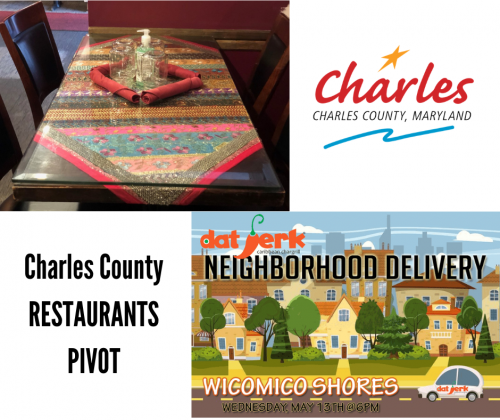 When Maryland Governor Larry Hogan issued a stay-at-home order in late March, our restaurants were allowed to stay open, but for carry out and delivery only. Those restrictions have gradually loosened, but not completely. We talked to the owners of Waldorf’s Dat Jerk Caribbean Chargrill and La Plata’s  Bollywood Masala to learn what they’ve done to survive the pandemic and plan for the future.

Shortly before the pandemic, Dat Jerk co-owner Angela Fray said, “We were in a good position because by husband foresaw that this was a possibility and started to put things in place before the governor mandated a shutdown. We’d already amped up our cleaning procedures, started wiping door handles, and making sure the bathrooms were overly sanitized.” They had also put up a barrier and plexiglass between customers and employees and the food line, installed a contactless checkout, and shut down a customer display that people had to sign with their fingers. And, to some customers’ disappointment, even the fountain drinks were blocked off.

“We took it seriously,“ she said. “We trained our staff, and we were ready. Or, we thought we were ready. Then all of a sudden, the sales dropped 45% in a week and a half, and we knew we had to step back and regroup.”

In the beginning of the pandemic, Governor Hogan was saying not to come out unless you needed to. So, the challenge was getting their product out to the people staying home. They already worked with third party delivery services like DoorDash and Postmates, but those businesses only delivered 6 or 7 miles from the store.

Dat Jerk decided to reach out to potential customers within a 30 mile radius with special scheduled deliveries.  Bollywood Masala did something very similar, reaching out to areas that were beyond the reach of their regular delivery services. Owner Raj Malhotra said, “We put the idea up on Facebook and asked our customers where they’d like us to schedule a delivery. Then we picked neighborhoods, and people would order and pay over the phone. We would set up a time and bring all their orders to the community at a common point. That’s actually done really well for us.” Dat Jerk has also found enthusiastic customers and success, and they plan to continue these deliveries after the pandemic.

Bollywood Masala’s buffet has always been a popular option for the weekday lunch crowd. So, after they closed down in the beginning to regroup, they redesigned the buffet. “We put plexiglass in front of the whole buffet line, and we turned the buffet around. So, instead of people serving themselves, we now serve the buffet for them. We lay the food out, a staff member stands on the other side of the buffet, you point out what you like, and we fill your plate and hand it to you at the end of the table.”

If customers want to come back for seconds, they must come with just their table of people so there’s no mixing with others. With this setup, Raj explains, “There’s nobody touching the food, you’re not talking over the food, and nobody else is touching the utensils. It’s only the person standing on the other side—no cross contamination.”

They are also working on contactless menus where a QR code is placed on each table so that customers can access the menu through their phone. Even the bathrooms have been upgraded with touchless hand driers and soap dispensers.

This pandemic has also given both owners the incentive to be more creative with their menu options. Taco Tuesday is a popular addition at Bollywood Masala, and Dat Jerk is expanding their patty line, which includes curry chicken patties, as well as three vegan and vegetarian patties made with kale & callaloo, chickpeas, and codfish.  They’ve also added a line of custom deserts.

Taking Care of Their Employees

After a brief shutdown at the beginning of the pandemic, Raj’s main concern was making sure his staff felt safe, and at the same time, their customers did too. They added a patio for the first time so customers could dine outside. He said, “It does get tough, and the revenue changes, but at the end of the day you have to look at the big picture. We have all the employees that were with us before. My basic motive was that all my employees have a paycheck to take home. That’s a very good thing—that’s a blessing.”

Angela found herself searching for PPE early on to protect her essential workers. She purchased a few thousand masks through a network of business contacts and also took advantage of the Charles County Department of Health PPE Grant, as well as the Maryland Department of Health and Human Services  to get masks. She credits being a part of the Charles County Economic Development Department’s Recovery Task Force with learning about the resources available to businesses and helped to spread the word. She said, “If more businesses knew about the resources that Charles County has, it would help them tremendously. At first, we were in that boat; we were out there by ourselves and trying to figure it out, but we’ve learned so much by participating in the task force.”