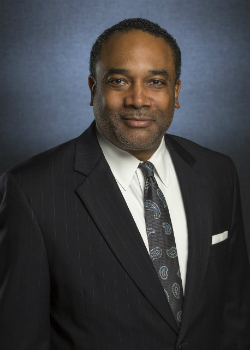 Mr. Brown brings to the county strong economic development and government experience at many levels, and has demonstrated exemplary performance in public service and education through interfacing directly with major governmental figures and negotiating with senior executives, investors, and small business owners. From 2011-2015, Mr. Brown served as executive director for the District of Columbia Small Business Development Center at Howard University. Prior to that, he was counsel to the U.S. Senate Judiciary Committee; director of State and Local Relations for Brown University in Providence, Rhode Island; director of Economic Development for the City of Cranston, Rhode Island; policy advisor for business and economic development for the governor of Rhode Island; chief of staff for the Office of the Attorney General of Rhode Island; and director of Urban Policy and Development for Rhode Island Economic Development Corporation. He began his legal career as a legislative aide in Washington DC and served a year as assistant attorney general in the Virgin Islands.

Mr. Brown holds a Juris Doctor degree from Howard University School of Law, a Bachelor of Arts degree from The American University, and is a graduate of St. John’s College High School in the District of Columbia.

In his free time, Mr. Brown enjoys being with family and friends. He is a fan of jazz music and enjoys the game of chess.

“Charles County is a great central location for us to have access to all of our customers. We do business with NSWC Carderock, Naval Research Laboratory, NAWCAD Patuxent River, NSWC Dahlgren, and Indian Head Naval Support Facility, to name a few.”

“Charles County is where we started our company and where we grew and expanded. We now operate our managed print and managed IT solutions in five states and provide custom apps all around the globe. Our headquarters is still in Charles County, an excellent place to conduct business and recruit highly skilled individuals for our ever growing team!"

“Charles County is a great place for businesses to start, grow, and thrive! We've worked with over 100 businesses since we opened our doors in Charles County, and I've witnessed the majority of these businesses achieve all three.”

“Charles County is a great place to do business because of the passion of the business community and the residents who strive to make it the best that it can be."